Residential home lighting has become very familiar and routine in our modern age. The LED Lighting advantage  has recently become  more of a factor in modern home lighting. As the Gas Lights faded, and our world became lighted by electricity, our societies energy usage grew and grew.  In order to provide electric light, our electric utilities need to generate more and more electric power. Using various lighting methods, i.e., LED’s,  incandescent, Tungsten, Florescent and others, we can generate lumens. We use lumens to measure  the” real visible light output” that illuminates the area in the region of a light source. So in general, it may be said that what we pay for in our electric bill, for lighting, is  lumens. Let’s examine what the costs are for lumens and what efficiencies we might expect from LED based lighting devices. 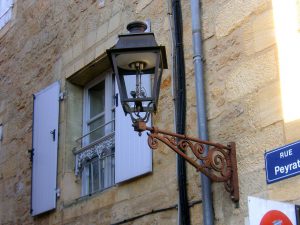 Early developments in lighting produced the Edison Bulb which was his invention for generating light from electrical current. After years of trial and error , Edison finally found the ideal “element” tungsten for generating electricity inside a bulb that contains  inert gases inside. Early on Edison was in favor of using direct current (DC) to light homes and factories. Another earlier electrical experimenter Nikola Tesla, was an advocate of using alternating AC current for powering homes and factories.  Eventually after years of competition, Tesla won the battle, due to the fact that AC electricity was easier and less costly to distribute using both very large and smaller  AC transformers.

Tungsten bulbs produce a very nice type of light which emits a  wide spectrum of white light. The more power we put into the light, the higher the electrical power usage and the more lumens we get out; but unfortunately  generate more than lumens.  We also get a lot of  energy in the form of heat!  This extra heat output results in  additional costs.  For instance in summer, if we run air conditioning , this additional heat generated will tend to make a room warmer.  We need to consider the fact  that  we are paying for ALL the electrical energy going into the light bulb, in the form of both heat and light. A typical 100 watt incandescent light bulb will generate about 1600 lumens.   Some more efficient  LED lights can also produce a nice warm type of white light that is similar to incandescent lighting.

What does it Cost To Run a 100 Watt Bulb all Year Long?

For example let’s assume that you are paying 20 cents/kilowatt hour  for your electricity.  Computing  these costs for a year gives us: 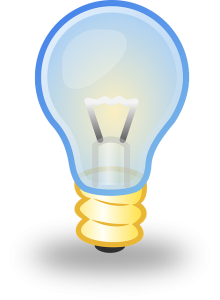 is equal to  (2400 watts-hours/day x 365 days/year) x (1kilowatt/1000 watts) = 876 kilowatts/year.  At the assumed  cost of $0.20 (twenty cents/kilowatt-hour) your yearly cost will be $175.20. At 10 cents per kilowatt-hour your costs will be $87.60 per year. Costs for electricity in your area will of course vary, and quite often you may be charged different costs/ kilowatt hour, depending on how much you use per month.  These blocks are sometimes called “tiers”.  Tiers typically result in much higher costs for energy, the more energy that you consume in one month.  In order to calculate your average cost of electricity per kilowatt,  you must average the amount and cost for each tier each month.  It is not uncommon in parts of the USA to see tier charges of over 50 cents per kilowatt hour!

The LED Lighting Advantage for Your Home

LED lighting can put out the same number of lumens as a 100 watt incandescent bulb, and  at a much lower cost. To get our typical 1600 lumens, we can use  an energy efficient LED type bulb.  According to the US Energy Department, LED lights with the ‘ENERGY STAR’ rating, use at least 75% less energy, and last at least 25 times longer than incandescent bulbs. So if we use these facts in the example above, our yearly costs for a 100 watt LED bulb/year will be about $45.80 and $21.90 respectfully. A great savings!

How is the LED Lighting Advantage Achieved? 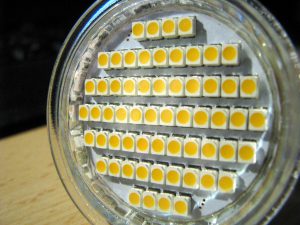 LED’s came into being in the 1960’s and were used at first for indicator lights. They are made from semiconductor materials similar to  transistors & diodes, and use a low power DC Voltage source. LED’s have no filaments or glass bulbs inside, but instead use  semiconductor chips which emit visible light when they are energized by an electric supply circuit. The color of the LED varies depending upon the type of chemicals used in the bulb. Early lights were red, green and blue in color. When these RGB colors  are combined,  or mixed a light very similar to white light is produced.  The  resulting  light can be easily focused with lenses or diffusers.  As semiconductor technology advanced over time, the cost of these LED lights continued to tumble.  Very cost effective LED lighting solutions have  been achieved today.  Using LED technology, a home or business owner can experience the LED lighting advantage , by combining good lighting and  energy efficiency, while  typically experiencing reduction in the cost of energy.